Millions of pounds have been spent in total in recent years in the UK on testing various forms of electronic voting, in the hope that this might raise turnout in elections. The overall verdict across different technologies – such as voting by SMS or online – has been remarkably consistent: it’s expensive, not very reliable, of dubious security and, above all, has almost no impact on turnout levels.

It’s easy to see how the idea of using modern technology has caught the eye and budget of decision makers. But with the emphasis on the high-tech, boringly old-fashioned items such as paperwork have got much less attention. And so, I present to you the humble poll card.

This document, sent to everyone who is entitled to vote in an election, is a crucial piece of communication even though it is not required to vote.

In most elections it is the only ‘official’ communication an elector receives. In many cases, given the varying ability of parties to campaign in different parts of the country, it may be nearly the only – or indeed the only – piece of paper electors receive about the election at all. It tells people how and where to vote. With millions of poll cards sent out each year, it’s a major potential way of communicating with the public about elections.

Poll cards look dull, uninviting and give you no reason to get interested in, or excited by, the prospect of voting. Take this example, which is my own poll card from Islington Council: 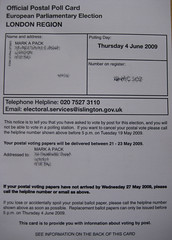 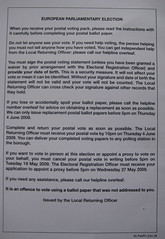 In fairness to Islington, two things should be said. First, the design of poll cards is heavily constrained by what legislation lays down. Second, Islington has been at the forefront of trying to do good things with poll cards, such as putting maps on them ahead of this becoming widespread practice. (My own, pictured above, doesn’t have a map because I am a postal voter.)

But even so, the front of the card has fourteen different fonts / faces / sizes. That in itself should be a big warning sign that the design is not as good as it could be. In addition, my electoral register number is given twice on one side. Moreover, the address to which my postal ballot will be sent is perhaps the most important piece of information – as that’s the one I need to check here and now to be sure that I don’t end up losing my vote – and yet it is buried two-thirds of the way down and is in one of the least prominent font / face / size combinations.

The reverse is a little better. The text I think is quite good, dealing with lots of issues that could come up and explaining them in plain English. Though again, it would not take a great designer to do better, such as with some sub-headings.

And overall? Well, it looks like a boring official document. It hardly leaps out for my attention from the doormat and does not make even the most cautious of attempts to interest me in elections. I love reading forms in all their details, though I decided not to tell US Immigration about the typo in the footnote on one of theirs; you never quite know how an armed guard is going to respond to being challenged over punctuation. But for better or worse the world’s not made up of people like me.

2 responses to “The problem with poll cards”