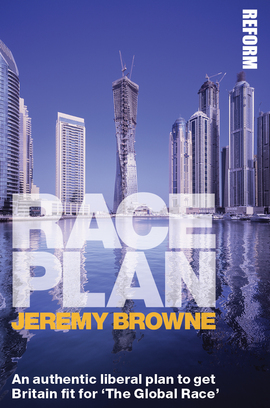 Is Jeremy Browne really a secret lover of state intervention and a sceptic of free markets, believing in big state spending, government economic planning and regular intervention in the market? For all of the veneer of free marketeering in his book Race Plan, not to mention his choice of Reform as the publisher, it’s a question that comes to mind because in-between praising specific free market, small state policies, Browne regularly praises the results of governments such as the Chinese and the South Koreans, who are anything but.

It’s his praise of South Korea that is the most intriguing, for China can simply be put to one side as dramatic but its own unique case (though, as Stephen Tall has said, it is still an odd example for Jeremy Browne to trumpet).

South Korea is, as Browne rightly points out, seen by many developing countries as the one to emulate, transforming itself from a poor dictatorship to a wealthy democracy with globally successful industries in less than half of one person’s life time.

Yet South Korea is also the poster boy for the countries whose economic development path spurned a simple free market approach, with tariffs and market intervention a key part of their development. Back in the 1980s and 1990s this mix of market economy with regular state action made Asian Tigers such as South Korea of interest to many centre-left economists (on which see Robert Wade’s classic Governing the Market). Plus all through this, South Korea did little to exert its influence on the wider world, relying heavily instead on the military protection and diplomatic patronage of the USA.

As policy mixes go, that makes South Korea’s record all rather social democratic rather than economic liberal. Yet the book has Jeremy Browne praising its results – and the rest of the book isn’t a repudiation of his previous free market views or an attempt to reconcile the difference between the policies implemented in the countries he praises and the policies he wishes to see in the UK. Instead, there’s a huge leap: be awed by these countries, but don’t do what they did and just don’t ask why.

It all leaves rather weak intellectual foundations for the polices Browne goes on to praise – which are the traditional economic liberal mix of small state, lower taxes and reduced welfare spending along with big investment in infrastructure and major changes to education. As Nick Thornsby has pointed out, this isn’t a simple right wing collection of policies, but nor is it one that his examples of other countries supports.

The other weakness in Browne’s case – aside from the ill-defined sideswipes at unnamed others by his use of the phrase “authentic liberalism” – is that the overall policy mix he proposes would have been imaginative, innovative and even politically exciting if made 35 years ago at the cusp of Britain trying to come out of the struggles of the 1970s.

Yet in the 35 years since then most of the policies he proposes have either been consistent political poison or notable by their failure. To take two examples: education vouchers have been controversial vote losers, whilst big and fast infrastructure investment is something politicians regularly call for and then, nearly as regularly, fail to deliver.

So how would Browne overcome that mix of policy failure and political disaster? I was hoping for an interesting answer to this, especially as Jeremy Browne is one of the leading proponents of how The Party Must Be Serious About Power, shedding what such people see as esoteric or unpopular policies.

Yet no real answers are provided in the book as to how Browne would make his policies effective or popular. Not even his experience of being a Liberal Democrat minister seems to have informed any new thought on how to resolve this question for the policies he promotes.

Rather like Jonathan Calder, I tend to the view that there are so few books published about what the Liberal Democrats should believe that the appearance of almost any is to be welcomed.

Race Plan certainly passes that test, even if in choosing to break the normal publishing cycle of putting out policy books after the May election season, and instead taking a path only Lembit Opik amongst Lib Dems has recently taken by publishing before polling day, Jeremy inevitably generated a round of hostile press coverage for the party a few weeks before polling day.

But the more substantive problem with the book is that while it’s a new book it simply presents old ideas without any new answers as to why they would be popular, right or practical.

And if Browne is right about South Korea, then following its policy successes means a Liberal Democrat party of the sort Vince Cable or Tim Farron prefers, not one of the David Laws or Jeremy Browne tendency.